Between 1952 and the year 2000, the destinies of the Musée Ariana and the International Academy of Ceramics (IAC) proved to be inextricably linked. The 520 or so contemporary ceramic pieces that have joined the Musée Ariana’s collections over the years thanks to the IAC have come from a variety of avenues and widely differing contexts.

Keen to make Geneva the world capital of ceramics, Henri J. Reynaud undertook from the outset to expand the Musée Ariana’s ceramic collections by opening them up to expressions other than European and historical. In 1960, its World Cultural Exchange was the pretext for an initial donation of 24 pieces from craft and artistic repertoires alike. In 1964, Edgar Pelichet established the Reynaud Prize, while for almost ten years the IAC rewarded winners of the Biennale of Vallauris and the International Competition of Contemporary Ceramic Art of Faenza with an acquisition for the Musée Ariana. In addition to these purchases, many spontaneous donations have also been made by IAC members themselves.

This exhibition is dedicated to all those craftsmen, all those artists and all those past and present curators who have nurtured this dream of a collection without aesthetic or geographical boundaries.

For the 70th anniversary of the International Academy of Ceramics (IAC), the Musée Ariana presents three exhibitions : MIGRATION(S), CONNECTIONS, VOCATION. 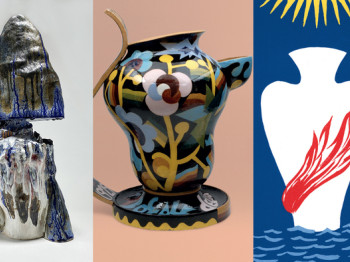 An everyday, collectible or historical object, the cup has always reflected evolutions in the stylistic and decorative tastes of its contemporaries.

As part of International Museum Day, Yusuké Y. Offhause has opened his own museum at the Ariana Museum, featuring the work of artist Thomas Bonny.

The artistic universe of Jeanne Rimbert (France, 1985) is deceptively idyllic.